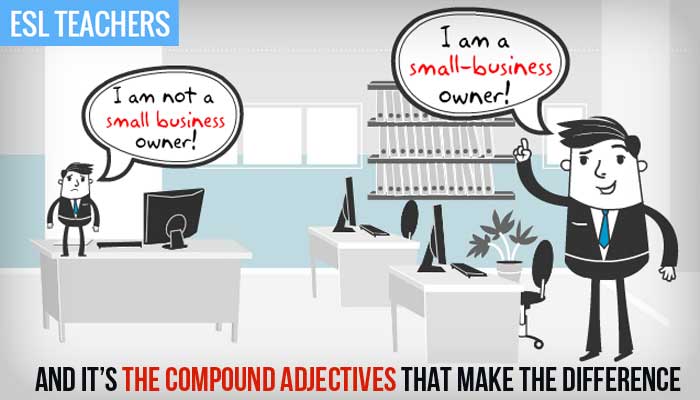 What is a Compound Adjective?

Compound adjectives are adjectives comprised by two or more different words to describe a noun in terms of age, depth, weight, price, size etc. Usually compound adjectives are hyphenated. A common mistake would be omitting the hyphen, which can lead to difference in meaning and confusion.
[adrotate banner=”8″] As shown in the picture above, a small business owner (no hyphen) means that the owner (person) is small in size, whereas a small-business owner (hyphenated, compound) means that the person owns a business, which is small in size.

Such adjectives may refer to the following categories:

A common mistake that people make is to add an ‘s’ to the number for plural.

A compound adjective may be formed by noun and the past participle of a verb. We put a hyphen between the two words, as well.
Noun + Past Participle (e.g. wind–powered)

We form another type of compound adjectives by connecting an adjective and present participle of a verb with a hyphen:
Adjective + Present Participle (e.g. pretty-looking)

We may also connect a noun and an adjective (with a hyphen) to make yet another type of compound adjectives:
Noun + Adjective (e.g. sugar-free)

When we connect an adjective and a noun with a hyphen, we are also forming a compound adjective.