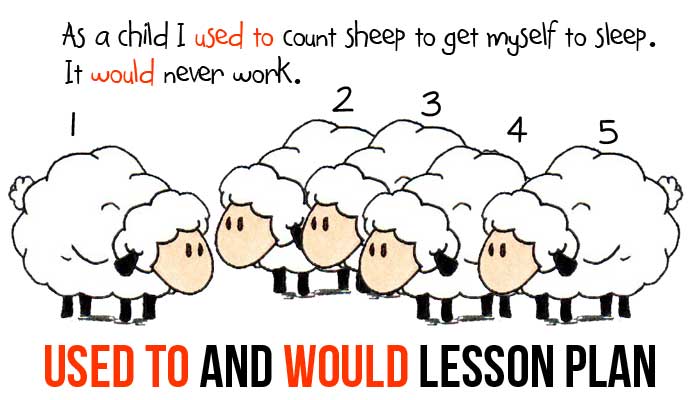 ESL / EFL Lesson Plan B1 – Used To And Would

Talking about past habits and past stages in life

The following ESL lesson plan (B1) teaches students how to talk about past habits and past stages in life in English. This English lesson plan is suitable for esl teachers who work with intermediate English learners.
At the end of the lesson plan you will find the Answer Sheet available for download.

Target Grammar: Used to/ Would (expressing past habits)
Target Vocabulary: Food, Talking about past stages in life

1. Look at the table. What food from the table have you recently cooked/ ordered/ eaten? Describe in a couple of sentences.

2. Listen to the conversation and fill in the table. Who prefers/ used to prefer what?

Rajiv: Hey, Naomi, how about sushi on Friday?
Naomi: Hm, I’m not sure sushi is such a good idea…
Rajiv: But you used to love sushi?! What happened?
Naomi: I still do. But yesterday we had some with Tina, and …
Rajiv: OK, I see. Well, then I have a better idea. Call Tina and let’s have a potluck party. I will prepare some spinach soup. It’s amazing. I used to like it a lot when I was a kid.
Naomi: Really? I used to hate spinach when I was a child. Tina still does, though. Maybe I can prepare some Neapolitan spaghetti. You like them, don’t you?
Rajiv: Sure, just skip the bacon. I am vegetarian, remember?
Naomi: For you I will make some without the bacon. And Tina will probably bring some of her delicious whole-wheat cookies.
Rajiv: Oh, I would eat piles of those when Tina and I were room-mates last semester.

3. Read the recipes. Circle the ingredient that does not fit.

Preheat the oven to 200C. In a small bowl combine the Parmesan cheese, cashews, lemon juice, garlic and salt. Place the broccoli on a baking sheet. Drizzle with butter and toss. Season with salt and pepper, to taste. Roast in the oven until broccoli begins to caramelize, about 20 minutes. Remove, and toss the broccoli with the cashew mixture. Serve warm.

Preheat the oven to 350 degrees F.

Gradually add the flour mixture into the butter/sugar mixture. Mix until just combined. Fold in the chocolate chunks and walnuts. Spoon the cookie dough by 2 tablespoon-size balls onto an ungreased cookie sheet. Bake for 12 to 13 minutes.
[adrotate banner=”9″] Let the cookies cool for 2 to 3 minutes and then transfer them to a cooling rack.

4. Refer to the recipes from Exercise 3. Mark the statements T for true, and F for false.

Used to + verb expresses that an activity was a past habit that occurred at an earlier stage of life. Also, it can be used to describe past states.

E.g. We used to have English breakfast every morning.
E.g. He used to be a professional dancer.

Would + verb shows a frequently repeated activity, or typical behaviour. Would + verb cannot be used to talk about past states.

E.g. I would go to the beach, and pretend I knew how to swim.

2. Make negative sentences from the examples below.

1. Share two of your favourite recipes.
2. Write three sentences for things you did routinely for each stage of your life:

3. Share some of the foods that you never used to eat before. Why? Do you eat them now?